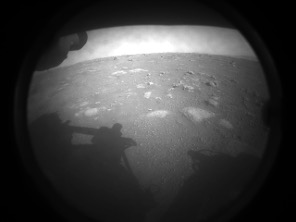 One of the biggest news these last few days in the science & technology field  was the landing, on the Mars surface, of NASA’s rover :  Perseverance and later on a buzz made by its parachute.

One can wonder how a parachute could possibly be related to our concern with computers.

But this is without counting on the malice of NASA to encode a binary message within the said parachute.

Indeed, many cameras were embedded onto the rover and its protective shell to allow us, earthling, to watch in an “almost” live show this landing.

During  the opening of the parachute in order to reduce speed, a look-up camera showed us a particular pattern inside the parachute.

This pattern, a son and his dad succeed to understand and crack it.

The message once deciphered tells NASA modo “Dare Mighty Things” and coordinates of the Jet Propulsion Laboratory which did most of the work on Perseverance.